“Out of time” consists of two interactive installations which explores the problem of the way time is passing. Both of them examine the shortest possible piece of time – the second, the moment, but in a different way. The first one plays with catching a flash – short motion of a man, something insignificant and ephemeral which passes by and is usually forgotten. Instead the installation catches this movement and repeats it again and again, locking it in time. The captured moving image is now out of the context of its environment, out of time. One second which doesn’t end. This peculiarity focuses the attention on itself making the minimal motion more significant and may be bigger. The man is able to trace himself, to become aware of his own movement in the space.

The second installation is also interested in catching the moment, but not by capturing simply one, rather many. It removes the linearity of time. The installation puts all the caught images of people in one place so they exist together into one moment and at the same time. One extremely long second or a whole day compressed into one moment.

The interaction in both installations modifies the role of the audience. The visitor himself is the fundamental theme of the work. A hybrid existence is created where every man is a participant, a main character and at the same time a spectator of himself.

video documentation of “out of time I” >> 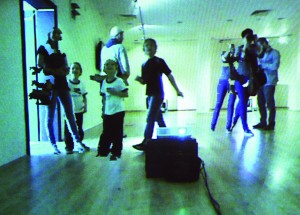 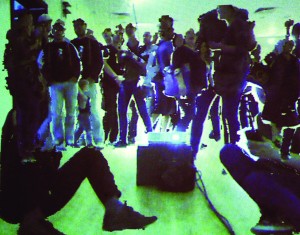